We perform on period instruments – originals or copies of instruments of the type which would have been known to the composers themselves. These are often considerably different from their modern counterparts.

This is a double-manual French-style instrument made by Anne and Ian Tucker in 1999. It is a replica of the Ruckers-Hemsch harpsichord (1763) in the Cobbe Collection at Hatchlands Park. (The original began life as a single-manual by Andreas Ruckers, later converted into a double-manual by Henri Hemsch.) It is identical down to the individual brush-strokes of the painting. Highly decorated, with gold leaf, it has two eight-foot registers, a four-foot register and a buff stop. It is strung in iron and brass, with free-range turkey quills. The sound is long and richly resonant. You can listen to this instrument on the Recordings page. 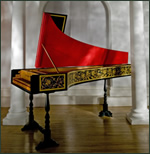 This is a single-manual Italian-style harpsichord made by Ransom and Hammett in 1993. It is a Venetian model after Grimaldi c. 1700, with two eight-foot registers and strung in brass. Like the Hemsch (above) it is quilled from turkey feathers. The technique for making the quills is similar to that for old-style pens. The sound is bright and immediate which makes it an excellent continuo (accompaniment) instrument where clarity of attack is often desirable. In solo repertoire it is especially effective, as one would expect, in quick-fire Italian music, for instance by Frescobaldi and Scarlatti.

Principal ways in which the baroque violin is different from its modern counterpart are the arched and pointed baroque-style bow, the gut strings and lack of chinrest, as well as a less angled neck. The lower baroque bridge, lower tension, and lighter barring and soundpost inside the instrument are also worth noting. This all goes to create a quite different sound from a modern violin, which blends very well with the harpsichord.

This is an original eighteenth-century instrument in baroque set-up by the Viennese maker, Joannes Georgius Thir. The dark staining of the varnish is typical of the Austrian/Bavarian violin-making school. This violin is strung in gut with an overwound G string and has a rich golden sound. The baroque bow is by Roger Doe.

This is a copy of a violin by Andrea Amati (Cremona 1564), one of a set of instruments made for King Charles IX of France. The original is now in the Ashmolean Museum in Oxford. The copy was made by Nanny Hergils in 2005. It is strung all in gut with equal tension. Slightly smaller than a standard full-size violin, this type of instrument, with its brilliant sound on the higher strings, was often used to play the top line in a violin band or other consort. Renaissance / early-baroque bow by Richard Wilson.

This instrument was made by Nanny Hergils 2004, after an Italian original by Lorenzo Storioni (Cremona 1786) in the museum of the Paris Conservatoire. It is an example of the Chanot design, and has twelve strings, six of which are bowed and six of which are sympathetic. The distinctive sound comes from the resonance of the sympathetic strings, which create a bell-like sweetness.